Beacon's Engram Control editor allows full control over how and when engrams are unlocked, as well as the number of points earned at each level. Its powerful wizard allows users to quickly build out common engram designs, such as unlocking everything except tek items at spawn and unlocking tek at a specified level.

The editor is split into two major sections, each with two columns. The Engrams list takes up the majority of the space and has columns for Engram and Behaviors. Beacon will list every engram with a known unlock code for the mods currently enabled. The Behaviors column will describe in plain English what the status of the engram is. The Unlock Points list is used for controlling the number of points awarded at each level. Both lists are pre-populated with Ark's default values. Any row in either list may be deleted to restore the value to Ark's default, and multiple selection is possible for editing or restoring many engrams or levels at the same time.

Ark has two settings which have a huge impact on how engrams behave, so those should be understood first. At the top of Beacon's Engram Control editor, there is a gear icon. Clicking the icon opens a menu with two options:

Unlock All Obtainable Engrams While Leveling (Laggy): With this option enabled, Ark will automatically unlock any engrams the player is able to learn at their level. Tek engrams are unlocked at level 1. Admins are advised not to use this option because there is significant game lag at every level up, even if there are no engrams to be unlocked. When this option is enabled, Beacon will immediately update its Behaviors column according to this setting.

Engrams Should be Disabled Unless Explicitly Enabled: Normally, all engrams are allowed and if the admin wants to prevent an engram from being learnable, the admin can add a config option to disable it. With this option chosen, the logic is reversed. All engrams will be disabled by default, and the admin can choose to enable engrams with config options. When this option is enabled, Beacon will immediately update its Behaviors column according to this setting. 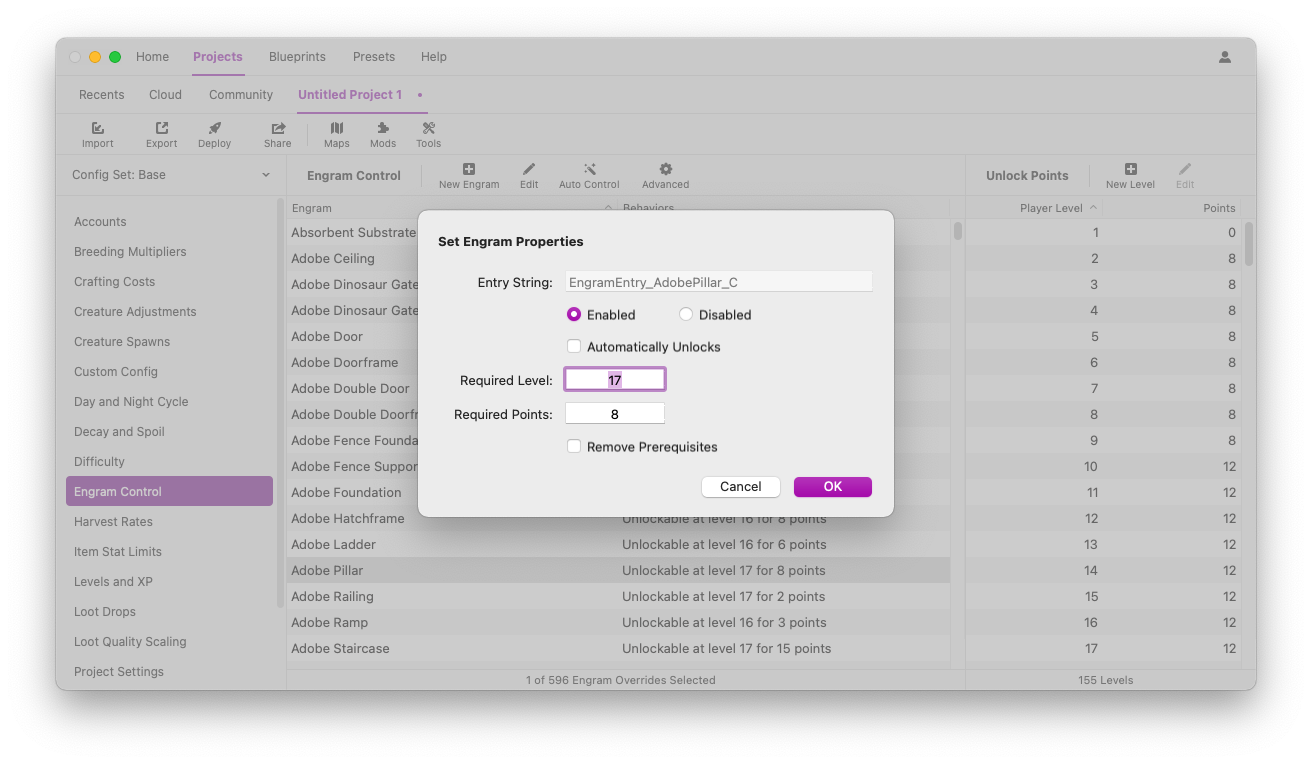 To change an engram, simply double-click a row or use the pencil icon at the top of the list. There are six options to choose from:

Enabled/Disabled: This option turns the engram on or off. When an engram is disabled, it cannot be learned and will not spawn in the game at all, including from loot drops. Cheat codes will still work, and disabling an engram will not prevent it from being transferred in from another server and will not destroy existing items already created.

Automatically Unlocks: This option causes the engram to automatically unlock at the level specified by the Auto Unlocks At value. The Required Points field will become disabled.

Required Level/Auto Unlocks At: This is the level the player must be to either make the engram unlockable, or have the engram auto unlocked, depending on the Automatically Unlocks choice. Some engrams will say "Tek" for this value. Ark does not allow Tek engrams to become unlockable. They must be auto-unlocked at a specified level, or auto-unlocked by meeting their original requirements.

Required Points: If the engram is not automatically unlocked, the player must spend this many points to unlock the engram.

After making changes, the Behaviors column will update to explain the new unlock behaviors.

The Unlock Points list on the right shows the number of engram points earned at each level. This list will update according to the levels defined in Beacon's Player and Tame Levels editor, if it has been used. The official player levels will be used otherwise. Double click a row or use the pencil icon at the top of the list to change the number of points earned for the selected level or levels. Use the add icon to define a new level if necessary. This will not add a new level that the player may earn, that must be done with the Player and Tame Levels editor.

Use the Wizard to Make Large Changes Quickly 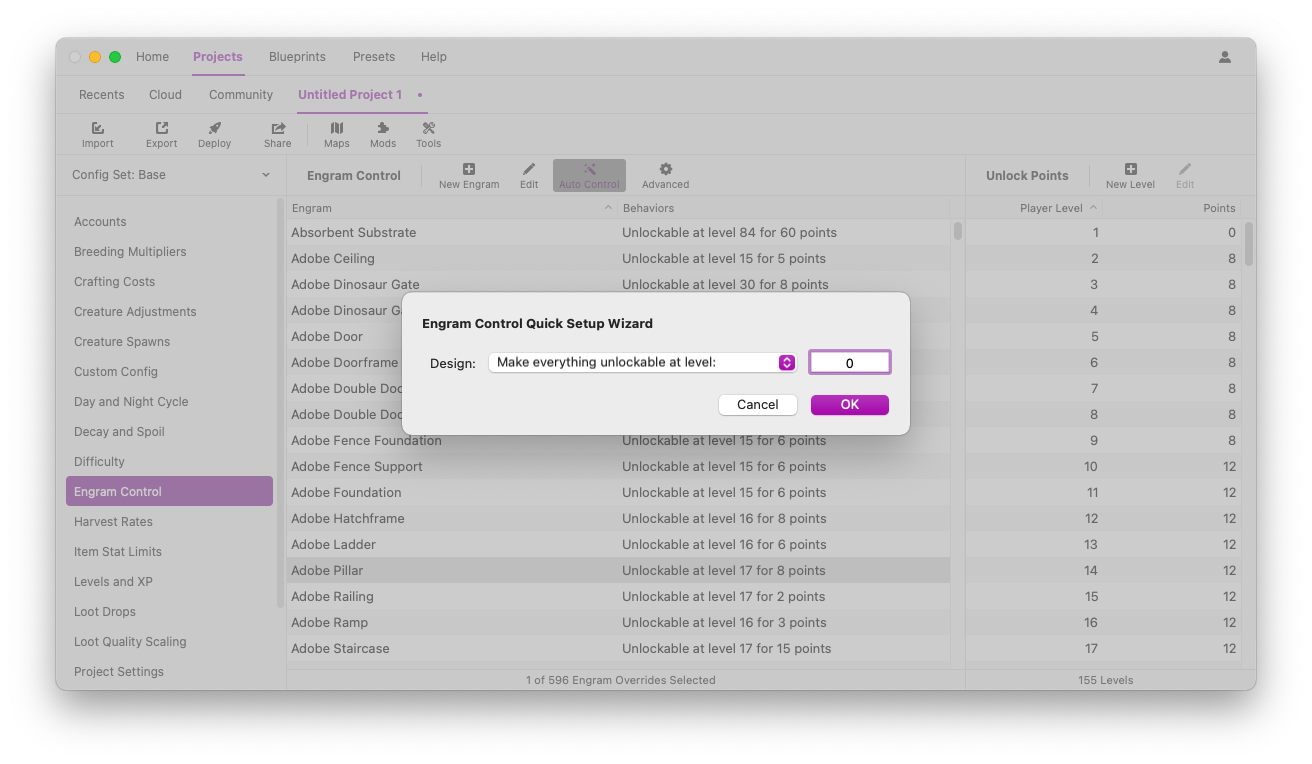 At the top of the Engrams list is a wand icon. Pressing the button opens a simple dialog with a Design menu. The following options are available:

Unlock all at spawn: All engrams, including Tek engrams, will be unlocked immediately when the player first spawns.

Unlock all except Tek at spawn: Same as the previous option, but Tek engrams will not be changed.

Unlock all while leveling: This option will produce the same behavior as the Unlock All Obtainable Engrams While Leveling (Laggy) option described above, but will do so by changing each individual engram. This will reduce lag, as Ark will not need to search through its entire list of engrams to determine what needs to be unlocked.

Unlock all except Tek while leveling: Same as the previous option, but Tek engrams will not be changed.

Unlock Tek at level: A level field will become visible. Use this to have Tek engrams automatically unlocked when the player reaches the specified level.

Grant exact points needed per level: Computes the total number of engram points required for every engram that is obtainable, not disabled, and not automatically unlocked, then changes the points earned at each level accordingly. This will respect any engram changes previously made.