Ark has a lot of breeding settings allowing admins to control things like baby mature speed, imprint frequency, and mating cooldown. This guide will help Ark server admins understand how these settings work together and find just the right values for each. 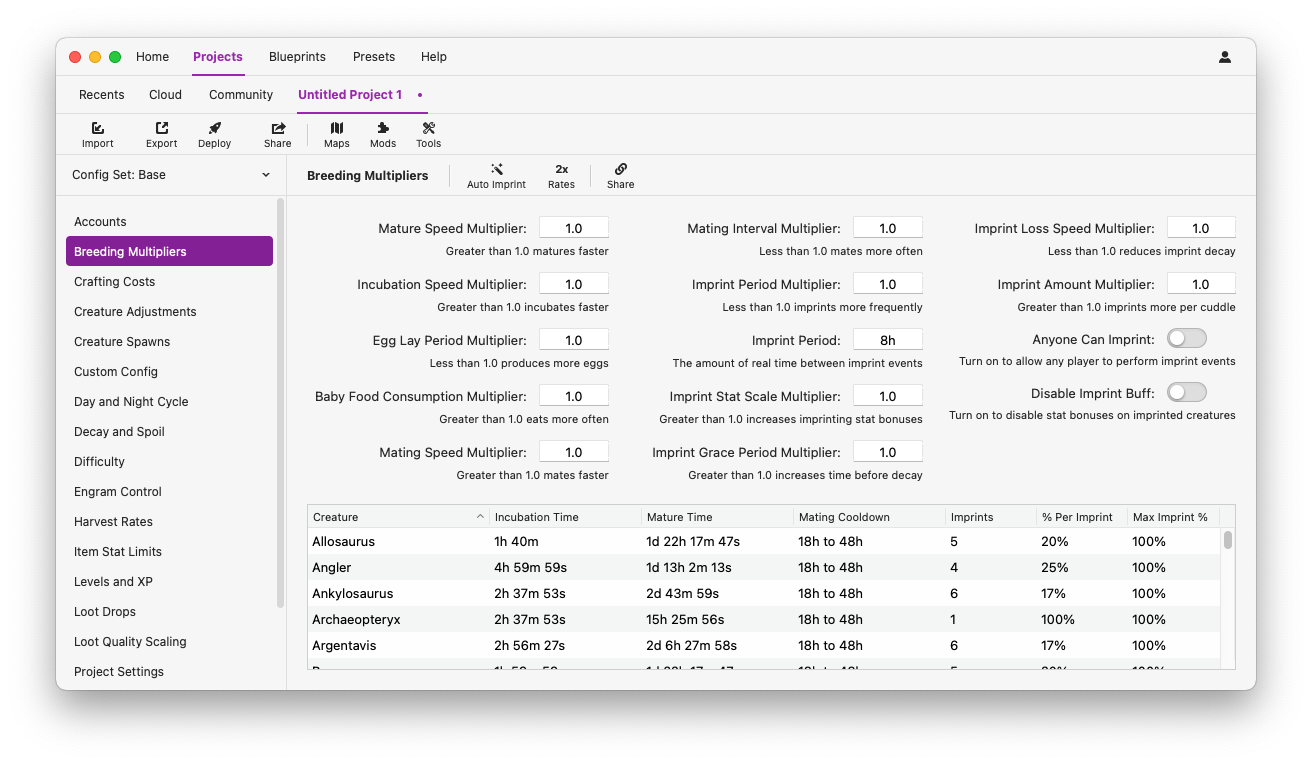 Because this editor has descriptions beneath each of the multipliers, this guide will cover only the major multipliers.

Increasing the Incubation Speed Multiplier causes fertilized eggs to hatch faster. See the Incubation Time column in the list at the bottom to see how multiplier affects the incubation time of the game's creatures.

Increasing the Mature Speed Multiplier causes hatched babies to mature faster. The time which creatures mature affects imprint parameters, so see the Mature Time, % Per Imprint, and Max Imprint % columns of the list below for how changing this value affects the game's creatures.

To find the amount of imprint to gain per cuddle, first the maximum number of cuddles is computed by rounding down the result of mature time ÷ imprint period. So a creature that matures in 12 hours would have 1 possible cuddle at the standard 8 hour mature time. Then the amount per cuddle is computed as 100% / max cuddles, in this case, 100% per cuddle. This means as long as a creature can cuddle at all, it is capable of reaching 100% imprinting.

Finding a good Imprint Period Multiplier is as simple as finding a value just slightly below the fastest maturing creature that you want imprintable.

Beacon includes a wizard for finding the right Imprint Period Multiplier based on your server's Mature Speed Multiplier and creatures you decide are important to imprint. Press the Auto Imprint button, choose the creatures you require to be imprintable, and press OK. You can then review the list to see its effect on the game's creatures.

Single player uses different baseline rates than multi player servers. Using the Rates button in the toolbar allows switching Beacon's baselines rates to match. This button has no effect on the server itself, it only changes how Beacon does its math. It will not turn on single player settings or event rates.