Ark server admins are given great control over the game's spawn system. Admins can add creatures/dinos to certain parts of the map, remove creatures, increase levels, and even change colors. This powerful editor requires great care though, as it's easy to create an overspawning problem.

Just like editing loot drops in Beacon, spawn points must be added to a file before anything will change on the server. Spawn points not added to Beacon will be left as default. 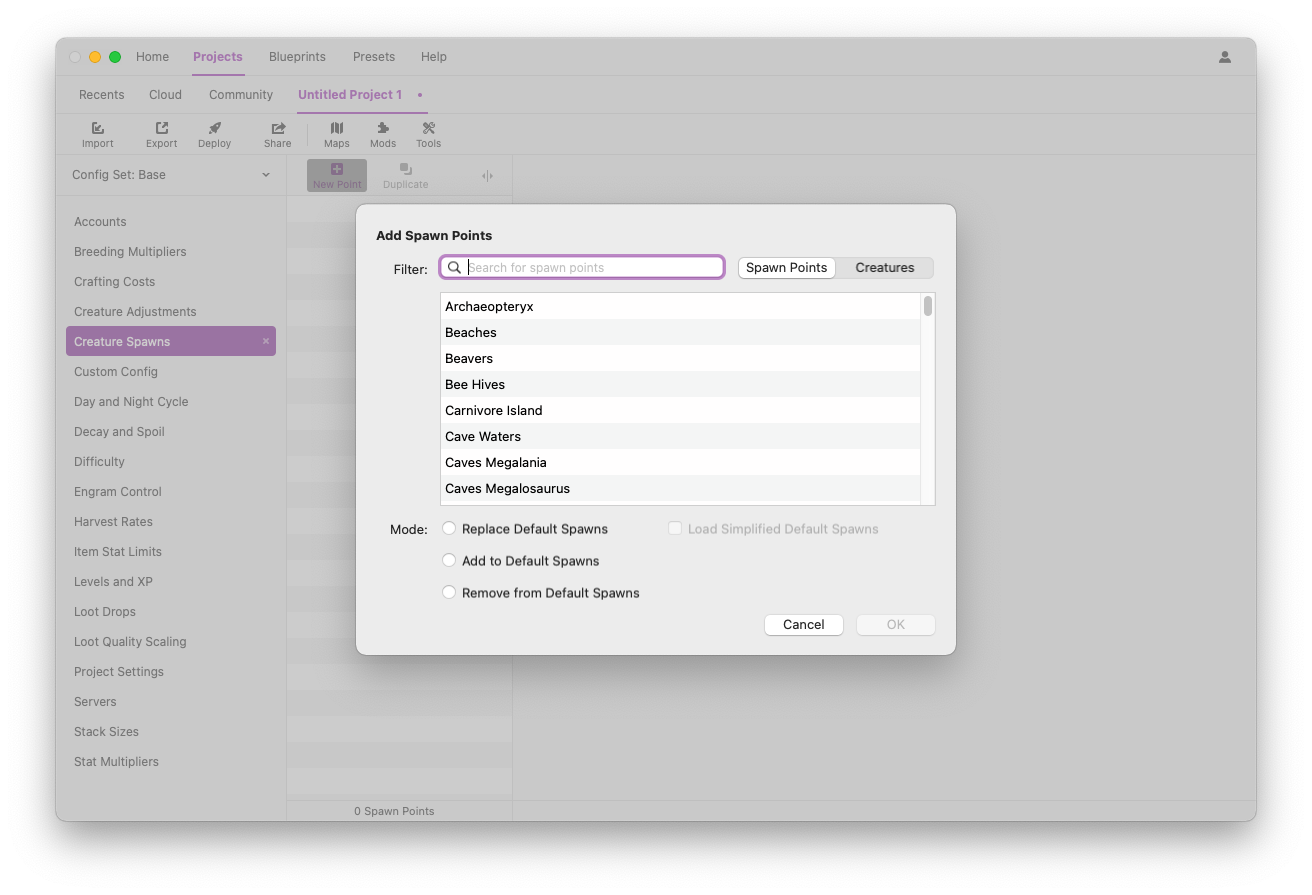 Users can select multiple spawn points to be added at the same time. Hold shift while selecting points to select a range. Windows users can use Control while clicking to select non-sequential spawn points, and Control-A will select all. Mac users should substitute the Command/Apple key for Control.

Beacon includes a Load Simplified Default Spawns option when Replace Default Spawns is the selected mode. This should be used with caution, because while Beacon has some details about the default spawn data, it is missing important details such as offsets and replacements. This could adversely affect the server, such as spawning creatures at very specific spots instead of a general area.

In this tutorial, the goal is to add Shinehorns to the beaches on The Island. Press the New Point button, select Beaches in the list, and set the Mode to Add to Default Spawns. 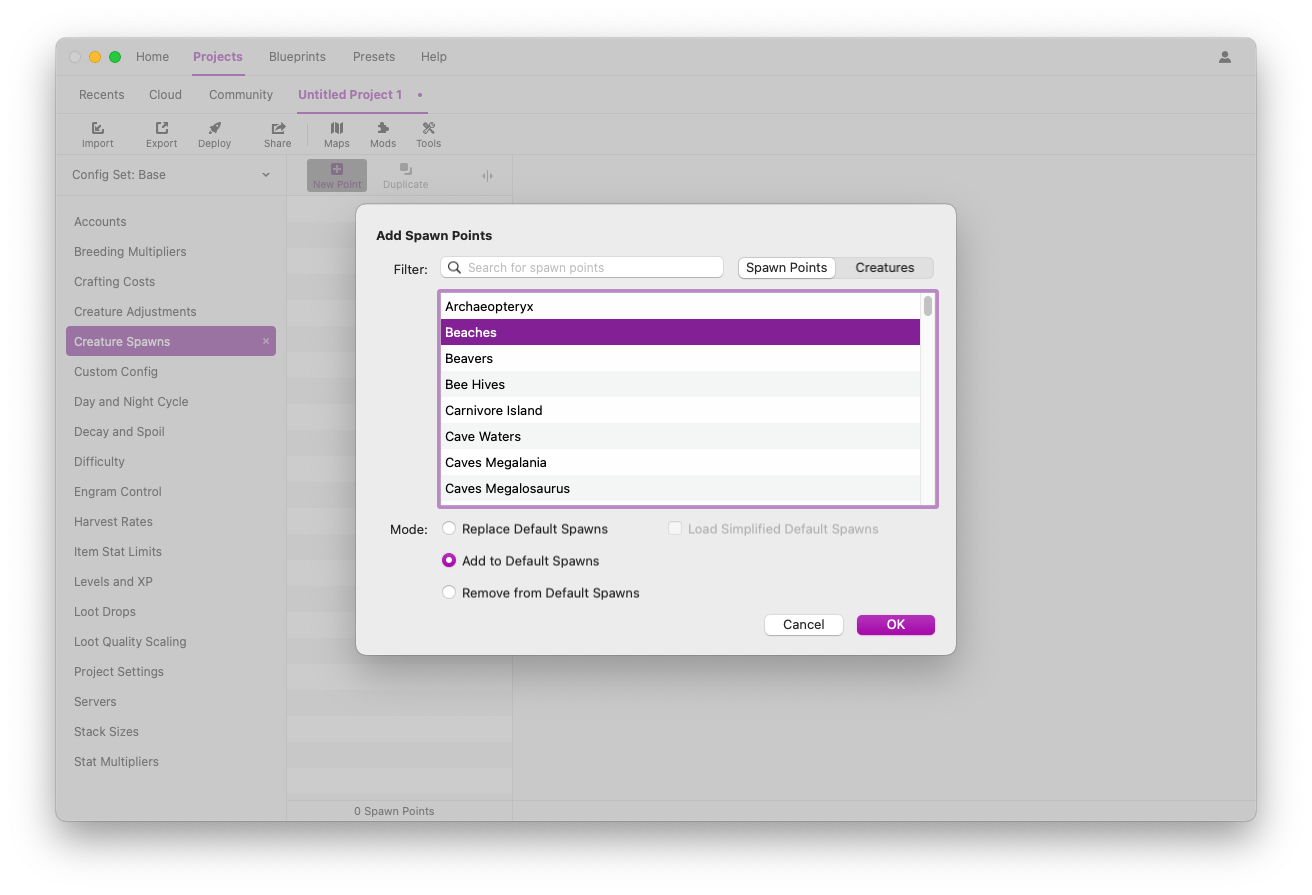 Press OK when ready. Next, add a new spawn set by pressing the New Set button in the Spawn Sets column. This will create and select a new spawn set. Use the Name field to call the spawn set Shinehorns. The Weight field in the upper right works exactly the same as every other weight value in Ark. Ark's default weight values are always less than or equal to 1.0, so Beacon defaults the weight to 0.5. The Beaches spawn point often uses much lower values, so to prevent being overrun by Shinehorns, set the Weight field to 0.06.

Tip: Create a new Beacon document, switch to _Creature Spawns, and add the same spawn point in Replace Default Spawns mode with Load Simplified Default Spawns selected. Then look through the weights of each default spawn set to help decide on an appropriate weight value.

Next, press the Add button in the Creatures box. In the Creature Entry dialog, press the Choose… button next to Creature and select Shinehorn. Leave all the other fields empty, they are not needed in this step.

At this point, the absolute minimum to make Shinehorns appear on the beaches has been done. However, they will always spawn directly on top of each other. The solution is utilize the Spread Radius value. Nearly all of Ark's default spawn sets use a value of 650, so enter that into Spread Radius. This will help, but there is more that can be done to make the spawn point feel even more natural.

It sounds weird, but the solution is more Shinehorns. Press the Add button again, select Shinehorn, but this time enter 680 into the Offset Y field. That's the middle one. Repeat these steps for values 340, -680, and -340. There should be a total of 5 Shinehorn entries in the Creatures list. To get the spawning to feel even more like Ark's spawning, set the Weight values of each entry according to the screenshot below. 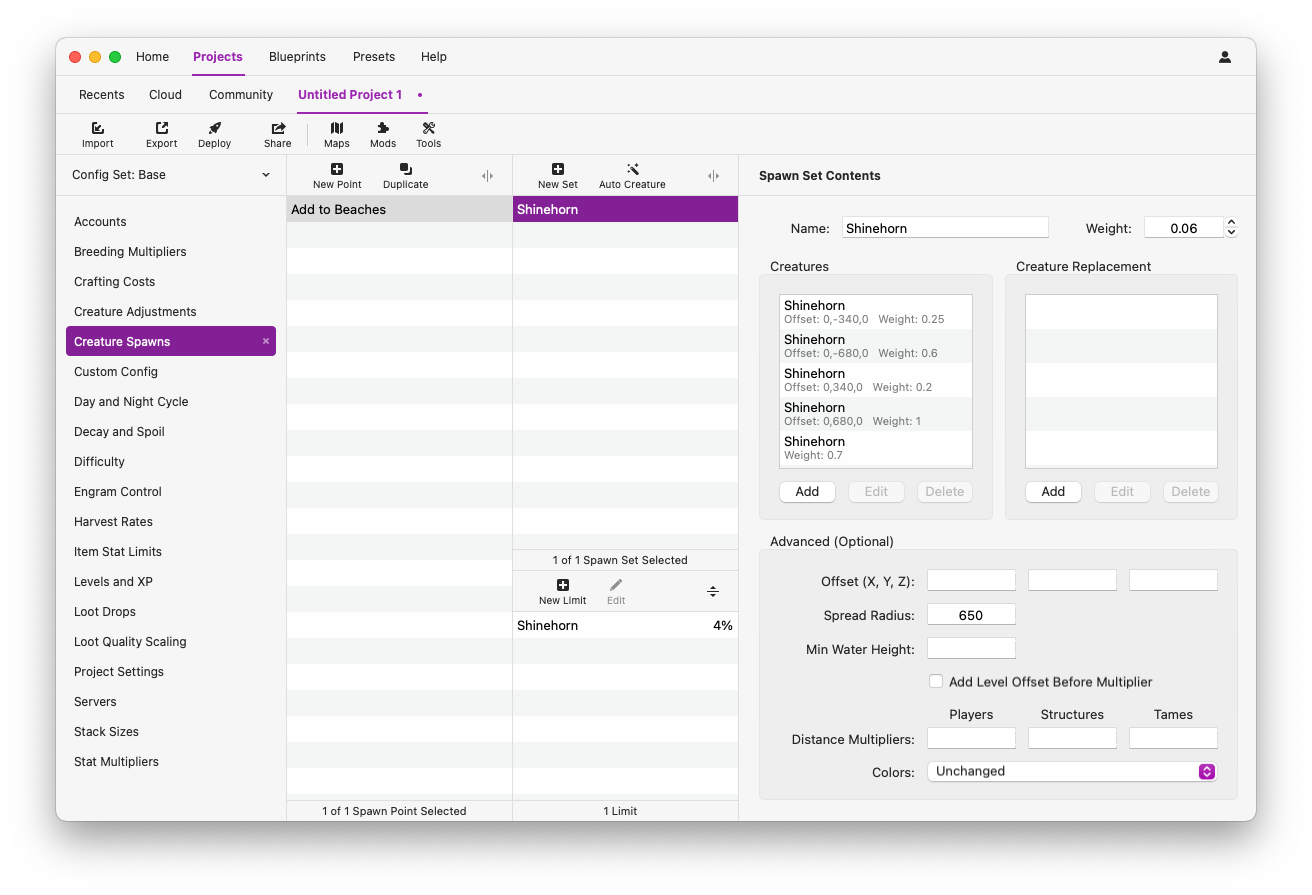 To save time, consider using the Auto Creature tool in the Spawn Sets column. This will create a new spawn set with common values. However, pay attention to the spawn set weight, as the chosen weights are estimated based on all maps and spawn points and may not be the best fit for the target spawn point.

Lastly, it is important to limit the number of Shinehorns that will spawn in the area. Press the New Limit button in the Limits section to define a new limit. From the Creature menu, select Shinehorn and set the Max Percentage to 5. This will limit the number of Shinehorns in each of the spawn point instances to 5% of the instance's total population. But... what does that actually mean? That's hard to know exactly. Most spawn point instances use a max population of 40. So 5% of 40 would be 2. This does NOT mean only 2 Shinehorns on the entire map. It means a maximum of 2 on each instance of a spawn point. The Beaches spawn point has many instances along the map's coastline. So a 5% limit could still produce dozens of Shinehorns on the map.

The limits work by counting the number of the limited creature that is already at the spawn point, and preventing a new spawn if that number is already over the limit. So, for example, setting the limit to 0.0001 does not mean the creature will not spawn. When there are 0 at the point, because 0 ÷ 40 = 0 is below 0.0001, the creature can spawn. As soon as 1 spawns, the limit is reached because 1 ÷ 40 = 0.025 is greater than the limit of 0.0001.

This means users could create a spawn set with a very high weight and very low limit that effectively guarantees one and only one of a certain creature.

Some users report Ark not obeying their limits when using the Add to Default Spawns mode. It may be necessary to replace the default spawns instead if population cannot be controlled with a combination of spawn set weight and population limit.

Each Spawn Set has many more options that can be used to influence spawning.

The Level Range, Level Offset, and Level Multipliers allow changing the level that creatures will spawn. Ark uses this for cave spawns, for example. Use Level Range to specify a specific range for the creature. The levels will automatically scale if the server difficulty is changed. Level Offset is a fixed number of levels to add or remove. Level Multiplier will multiply the creature's level. A value of 2 would turn a 120 creature into a 240 creature, for example.

A Spawn Set can exchange creatures for other creatures. Ark typically uses this to add alpha creatures wherever a standard creature could spawn. When adding a replacement, the replaced creature should also be included. For example, adding Alpha Raptor would be done by adding a new replacement and choosing Raptor as the Target Creature. Next add Alpha Raptor as a replacement creature, and set the weight to 1. Then add another replacement, this time select Raptor and set the weight to 9. This will give a 10% chance for any raptor in the set to be an alpha raptor. 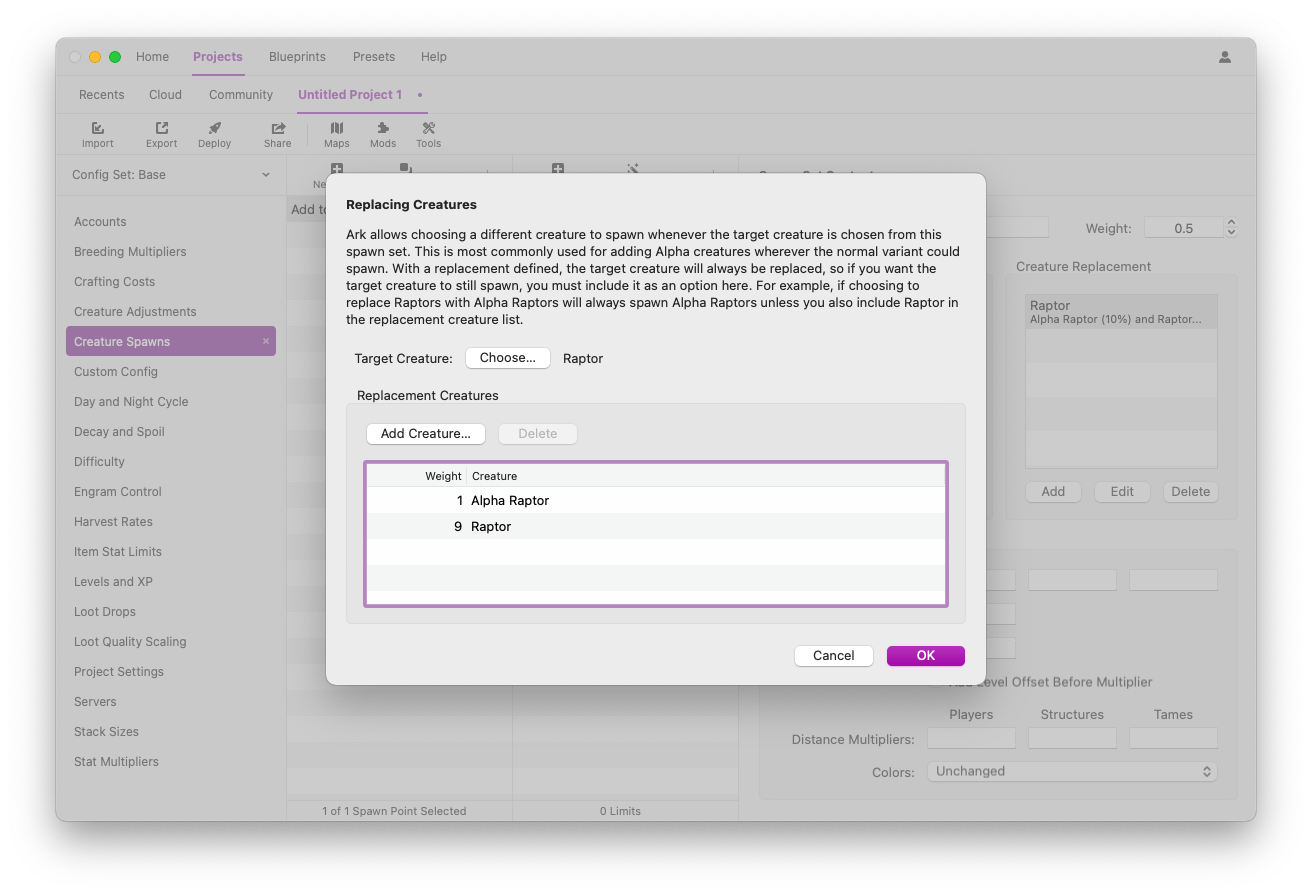 When removing creatures from a spawn point, most options are not useful at all. Use a Spawn Set and list the creatures that should be removed in the Creatures box.